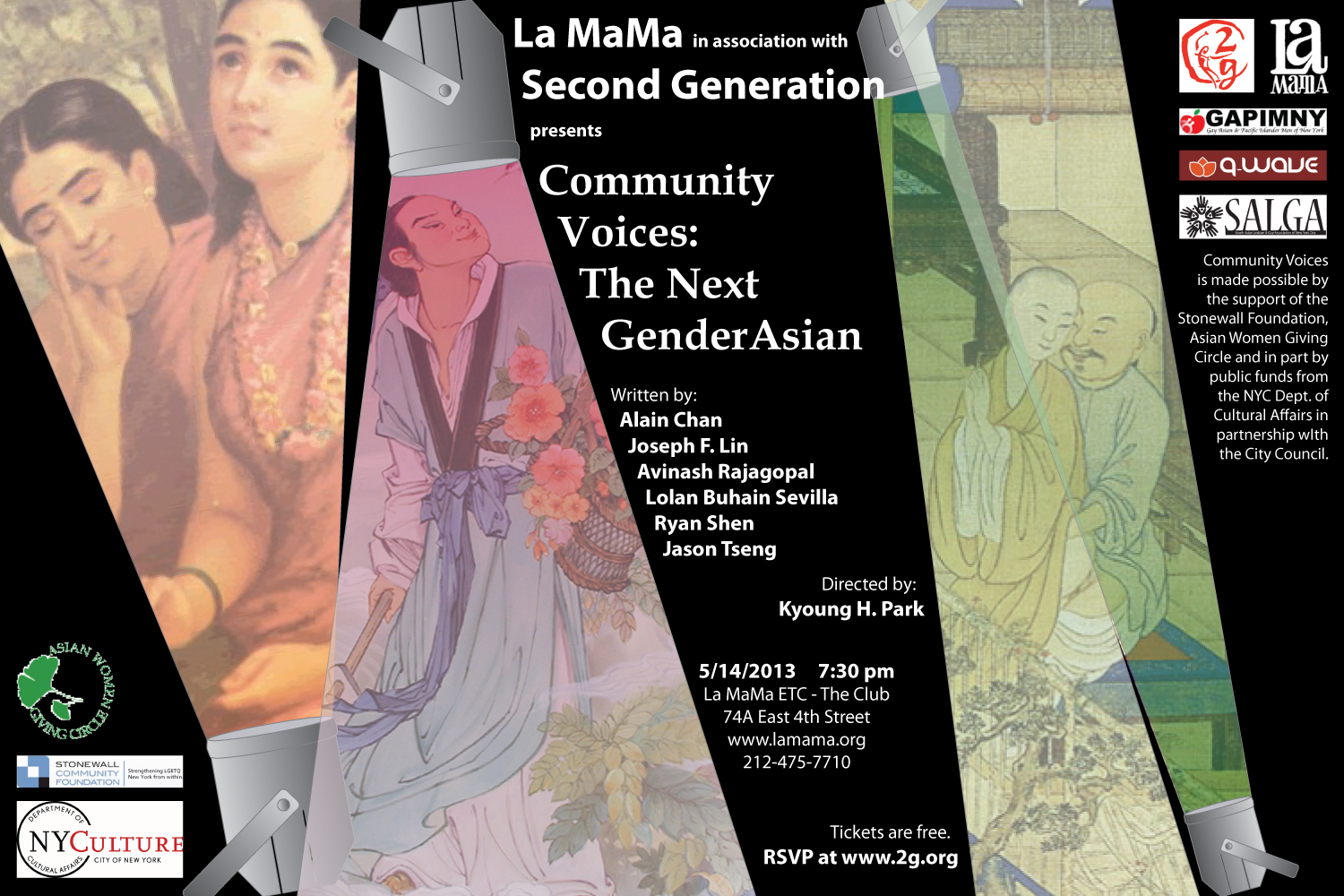 La MaMa in association with Second Generation presents “Community Voices: The Next GenderAsian,” a concert reading of six ten-minute plays offering raw and outrageous perspectives on what it’s like to be queer and Asian-American today. “Community Voices” features new plays written by Alain Chan, Joseph F. Lin, Avinash Rajagopal, Lolan Buhain Sevilla, Ryan Shen, and Jason Tseng, directed by Kyoung H. Park. This evening is free and will take place at The Club at La MaMa on May 14th at 7:30 PM.

“Community Voices” is sold-out. To sign up for our wait-list, please email Lisa Chan at lisac@2g.org.

This January, six writers were selected to be part of “Community Voices: Queer API” following an open application process promoted city-wide to all members of our Asian-American community who identify as Lesbian, Gay, Bisexual, Two Spirit, Queer, Trans and Gender Non-Conforming.

On Saturday, November 17th, 2012, Deen (Community Voices Writing Workshop Director, Playwright), Clarence Coo (Playwright), and Ryan Shen (Community Organizer) joined 2g at the HERE Arts Center for “Queer Voices Speak Out,” a pre-show panel discussion moderated by Kyoung H. Park (2g Director of Strategic Planning). The panelists shared their stories as gay, Asian writers and provided more information about how you can become part of this exciting new program. “Queer Voices Speak Out” was held prior to 2g’s “Instant Vaudeville” and a post-show reception was hosted by 2g, in collaboration with GAPIMNY, Q-Wave, and SALGA. For full transcript of the panel, click here.

Founded in 1990, the Gay Asian & Pacific Islander Men of New York (GAPIMNY) has provided a safe and supportive social, political, and educational space for gay, bisexual, and questioning men and transgender people of Asian and Pacific Islander heritage in the Greater New York Metropolitan Area. GAPIMNY is a membership-based organization whose goal is to empower its community through a range of social, educational, peer-support, cultural, and political activities. We work in coalition with other community organizations to help educate the API ethnic and LGBT communities on issues of race, sexuality, gender, and health.

Q-Wave is an organization for people of Asian Pacific-Islander descent who identify as lesbian, female bisexual, or transgendered and for anyone who is questioning her identity or sexual orientation. We encourage the involvement of all of our members and want to be sure that their concerns and interests are heard. We seek to make ourselves visible within the queer community, among Asians, and society in general through outreach, cooperation with various organizations, and other projects. Our name reflects the fluidity of the identity and individuality of queer female API people, their lives, and places in society.

The South Asian Lesbian and Gay Association of New York City [SALGA-NYC] is a not-for-profit, all-volunteer organization, serving the South Asian LGBT & Questioning community for over 10 years. SALGA-NYC is a social, political and support group for lesbians, gay men, bisexual and transgender people who trace their descent from countries such as Afghanistan, Bangladesh, Bhutan, Burma, India, Nepal, Pakistan, Sri Lanka and Tibet as well as people of South Asian descent from countries such as Guyana, Trinidad and Kenya.

“Community Voices: Queer API” is made possible by the generosity of the Stonewall Foundation and the Asian Women Giving Circle.